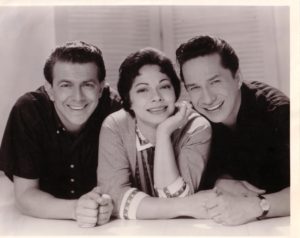 The Mary Kaye Trio ( Mary Kaye- Frank Ross- Norman Kaye ) signed a contract to stay together as equal partners for 20 years in 1955.

In the late 40s, 50s and 60s, a fresh, young, attractive, multi-talented trio; Mary Kaye, her brother Norman Kaye, and Frank Ross, blended their music and comedy to become known worldwide as “The Mary Kaye Trio “. They had 13 albums, 21 singles, 3 movies, & appeared on all the television shows; Dinah Shore, Perry Como, Milton Beryl, etc. With appearances at the top clubs throughout the world, London’s  Talk of the Town, Sidney, Australia’s Chevron Hilton, Chicago’s Chez Paree, New York’s Copa and Sherry Netherlands, Houston’s Shamrock, Los Angeles’ Ciro’s , The Cloister,  and The Crescendo, they were considered the best trio in show business. They were consistently voted the best jazz group in the Playboy Jazz poll in the late 50s and early 60s.

They headlined in Las Vegas & Lake Tahoe Casinos 6 months a year, as the highest paid lounge act of the era. Their fans included Society blue bloods, high rollers, mob bosses, and other entertainers who dropped bundles of money all night long, while waiting to watch their shows.

In Las Vegas the era of lounge entertainment arrived in 1949 with The Mary Kaye Trio, Mary Kaye, & her brother Norman, along with comedian Frank Ross appearing in the tiny “Gay 90s Bar” at the Last Frontier. It was later rebuilt as the “Cloud 9 Room” just for the Trio, with a 300 seating capacity. They also worked the main rooms at the El Rancho and the Last Frontier. Coming out of the “Ramona Room” at the Last Frontier into the “Gay 90s Lounge” in 1953 they became an over-night sensation, attracting SRO (standing room  only ) crowds for 20 straight weeks, ushering in the fabulous era of top name lounge acts.

George Schlatter producer of Laugh-In, at the 75th Anniversary celebration of Las Vegas Entertainment announced “The greatest act ever to play Vegas was The Mary Kaye Trio” As a Vegas booking agent in the1950s, he recalls the Trio’s engagements at The Last Frontier “by the third night you can’t move. They’re the biggest hit on the Strip, because at that point there was no Rickles there was no Louis Prima and there was no Shecky Green. The Trio became a favorite of the stars. On any given night, celebrities like Ella Fitzgerald, Judy Garland, Sammy Davis Jr., Frank Sinatra, Betty Hutton, Milton Beryl, and Liberace rubbed shoulders with regulars at the groups show.”

Sclatter continued “The Mary Kaye Trio changed the history of Las Vegas. They were all over the room, & they were hysterical. Anybody who ever saw the act realized this was the most sound you ever got out of three pieces. And goddamn, they were funny!”

Pete Barbutti says, “Frank Ross of The Mary Kaye Trio was the guy who really started lounge comedy with his off-the-cuff routines. Shecky Green, Don Rickles, and “The Rat Pack” all found out what premise worked, by watching Frank Ross.”

He would react to whatever was going on in the room, whether it was a celebrity, a dish dropped, bartenders, waitresses — everyone was part of the routine. In the middle of the act he’d yell over the audience to a crap table “hey, you with the hockey puck, keep it down”. Before the trio, this just didn’t exist. With the casino bosses, employees, celebrities, & the audience engaged, it was a SRO party every night The Trio was in town. According to singer and former Lt. Gov. Lauri Hunt “You had to be there”!

Mary Kaye, with a beautiful face and hour-glass figure, was a phenomenal singer, equal to Ella Fitzgerald and Sarah Vaughn. Judy Garland, one of her most enthusiastic fans would stand up and yell at the audience to “shut up” when Mary started to sing.

She was one the greatest guitarist of all time, with the “Mary Kaye Strat” named in her honor.  She was inducted in the Musicians Hall of Fame, and with her incredible talent, she had no equal.

Norman Kaye, was not only a musician and exceptional singer, he was a prolific songwriter, composing for singers such as Johnny Mathis and Perry Como. He wrote such standards as “A Maile Lei For Your Hair”, and lyrics for the “Hawaiian Wedding Song”. He also recorded rock as “Little Norman” . His Norman Kaye Realty was the largest in Nevada, and he was the state’s Poet Laureate.

Frankie Ross, aka Biagio Rossario Salvatore Blogna, comedian and musician was born in Lakewood, Ohio. His Italian (Sicily) Immigrant parents started him on the accordion at an early age. As a teenager he worked club spots in Cleveland. He was appearing at the “Metropole Jazz Club” in Cleveland, when Louis Prima caught his act and recommended him to the Kaaihues.

At age 17, he joined Johnny Kaaihue & his Royal Hawaiians to replace Norman Kaaihue (Kaye), who had been drafted. Although his forte became comedy, he was proficient on piano, drums, bass, and the accordion.

Mary & Norman Kaaihue had appeared on stage with their father, Johnny Kaaihue (of Royal Hawaiian heritage) since they were small children.

In early 1945, Mary Kaye, Frank (Biagio) Ross, & Jules Pursley left the group to form “The Mary Kaaihue Trio “. They appeared up & down the east coast and midwest,” The Biltmore”, “5 O’clock Club”, “Mardi Gras”, Orchid Lounge, etc. building a devoted following. The Orchid Lounge in Springfield, Illinois was a hotspot in the late 40s, along with seven other casinos who had located there after the mobs were run out of Chicago. The owner Matt Monsello became a lifelong friend.

In 1947 Norman Kaaihue joined Frank (Ross Blogna) and Mary Kaaihue when he was discharged and Jules Pursley was drafted. When Jules was discharged he and Mary Kaye were married and he became the road manager for the Trio. To become less associated with Hawaiian music, they changed the name to The Mary Kaye Trio, as equal partners. Ross Blogna changed his name to Frank Ross, & Mary & Norman changed their last name to Kaye. The name Frank Ross came about because of his impression of Frank Sinatra. Everyone called him Ross and he was introduced as “our own Frankie – Ross”, so it stuck.

They continued to improve their comedy & music through the next few years blending the three voices to achieve their unique sound and style, while headlining at the top clubs in the US, Sydney, London and around the world while working Las Vegas, Tahoe, & Reno over 6 months a year.

At the Cairo, in Chicago, Billy Burton came on board as their manager, and was instrumental in their success and keeping them on track until his death in 1962.

As they became more in demand, they became the pets of Palm Beach Society at the Casablanca, where Jules Stein, owner of MCA, made them his special project after catching the act there. In Palm Beach they partied every night with society icons like the Dodges, who became devoted followers.

January 23rd, 1965, still at the height of their success, they bid farewell to a tearful SRO, celebrity filled audience at the Tropicana’s Blue Room in Las Vegas and dissolved the trio. Mary and Frank had been together for twenty-two years, starting as teen-agers in 1943, two with her father, Johnny Kaaihue, and two more with Jules Pursely1945-1947 as they formed The Mary Kaaihue Trio. Frank, Norman, and Mary spent the next eighteen years together as the fabulous ” Mary Kaye Trio “, entertaining audiences, raising families, and setting a longevity record for three entertainers remaining together without interruption.

Mary Kaye became a solo act, then with Frank & Norman’s blessing, she tried working with another trio. Later she produced the Mary Kaye line of dolls, among other pursuits and businesses. The Mary Kaye Stratocaster was reissued in a limited edition in 2005, giving her a much deserved recognition. Mary lived in Las Vegas until her death in 2007.

Norman Kaye continued with the Norman Kaye Realty, and was active in Nevada ventures and continued as Nevada’s Poet Laureate until his death in 2012.

In February, 1965 Frank Ross started a successful comedy team (“Ross & Hunt”), with Blackie Hunt, which dissolved in 1967. Frank’s last entertainment appearance was on The Ed Sullivan Show on 1967. He then became an agent with Jerry Perenchio, and later started Frank Ross & Assoc., personal management for entertainers. Frank passed away in Hermosa Beach, Ca. in 1995.