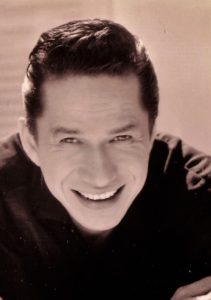 Norman Kaye descended from Hawaiian royalty in the line of Queen Liliuokalani, Hawaii’s last reigning monarch. He was not only a musician and exceptional singer, he was a prolific songwriter, composing for singers such as Johnny Mathis and Perry Como. He  wrote such standards as “A Maile Lei For Your Hair” and lyrics for the “Hawaiian Wedding Song” & “Stay”.

George Schlatter of Laugh-In, at the 75th Anniversary celebration of Las Vegas Entertainment announced “The greatest act ever to play Vegas was The Mary Kaye Trio” As a Vegas booking agent in the1950s, he recalls the Trios engagements at The Last Frontier “ by the third night you can’t move. They’re the biggest hit on the Strip as The Trio became a favorite of the stars. On any given night, celebrities like Ella Fitzgerald, Judy Garland, Sammy Davis Jr., Betty Hutton, Milton Beryl, and Liberace rubbed shoulders with regulars at the groups show.”Sclatter continued “The Mary Kaye Trio changed the history of Las Vegas. They were all over the room, & they were hysterical. Anybody who ever saw the act realized this was the most sound you ever got out of three pieces. And goddamn, they were funny!”

Norman also recorded rock as “ Little Norman”.  His Norman Kaye Realty was the largest in Nevada, and he was the state’s Poet Laureate.

His wife Barbara and his children, John, Tracy, Richard, Don & Sherri survive him in Las Vegas. His son John Kaye continues the music with ” John Kaye & the Overlords “.